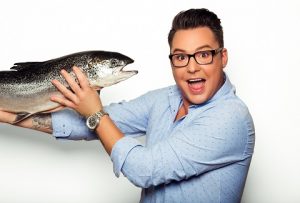 Olympusat Inc. is among the largest independent media companies in the planet and has carved a powerful niche in Spanish network ownership as well as content production and distribution, including technical services such as film dubbing and restoration.

“This is definitely a good recipe,” said Olympusat’s Senior Vice President of Content Acquisition and Channels Aurora Bacquerie about adding Gusto TV to VEMOX’s growing list of channels. “We are confident Gusto TV will feed viewers with a constant buffet of top-notch content for many years to come,” she added.

Gusto TV aims to stimulate both the appetite and imagination with a vast selection of food culture and lifestyle shows. The channel’s  Latin audience will soon have access to nine series and five specials, including Flour Power, Spencer’s BIG 30, The Urban Vegetarian, The Latin Kitchen, Crate to Plate, Fish the Dish, One World Kitchen, Road Grill and Spencer & Robert’s Game Day Buffet.

“Launching on VEMOX is a tremendous opportunity to bring Gusto TV to hungry viewers in Latin America and Hispanic audiences in the US,” said Corey Caplan, Senior Director of International Sales, Gusto Worldwide Media. “We’re looking forward to a lasting relationship with Olympusat and can’t wait for VEMOX viewers to get a taste of what Gusto TV has to offer.”

Gusto TV is owned and operated by Canada-based Gusto Worldwide Media, a leading producer of cooking and food-culture programming. The VEMOX streaming or ‘Over the Top’ (OTT) platform features more than 60 SD and HD channels, the majority of which are in Spanish and cater exclusively to a rapidly-surging subscriber base in the US and Latin America. VEMOX is a trademark of Olympusat Inc. and is available on Amazon Fire TV and Fire TV Stick, Google Play, the Apple Store and on many Smart TV brands, including Samsung and LG. To learn more about VEMOX™, please visit vemox.com

Gusto TV is the world’s most innovative linear food and lifestyle television channel. From in-studio cooking series featuring creative recipes and dynamic hosts to fascinating documentary and reality series about food culture and sustainability, Gusto TV delivers a diverse mix of engaging and inspiring cooking and lifestyle programming that resonates globally. With hundreds of hours of visually stunning original content, Gusto TV’s internationally acclaimed series include One World Kitchen, The Latin Kitchen, and Crate to Plate.

Based in West Palm Beach, FL, Olympusat, Inc. is one of the largest independent media corporations specializing in ownership, distribution, production and technical services. The company has established itself as a leader in the Hispanic television and media space through its 60+ HD Spanish and English-language television networks, among them the top-rated Spanish-language movie channel Cine Mexicano, the popular  Ultra HD Plex, and a distinctive religious channels and Specialty Suite representing some of the biggest networks in the industry.